The newest solution for fabricating patterned transparent electrodes on any size touch screen are CNT-AgNW hybrid films. The properties attributed to these hybrid films overcome the manufacturing, electrical, and optical challenges mentioned above thanks to a simple, scalable deposition process. Available on a variety of flexible substrate materials, this screen printable hybrid can be easily added to glass, PET, PEN, or polycarbonate (PC) panels by way of an OCA, making them easy to incorporate into standard LCD/LED touch screen stackups.

For large-format touch screens, CNT-AgNW material provides a useful alternative to ITO, bare AgNWs, metal meshes, and conductive polymers as it provides consistent sheet resistance over large areas. This is thanks to a simple, scalable fabrication procedure, where films can be printed on a variety of transparent substrates directly from a suspension. This yields the electrical and optical properties required for large-format touch screens, as well as other advantages for flexible touch screens.

Learn more about current issues plaguing the manufacturing of large format touch screens as well as the advantages provided by this alternative class of carbon hybrid material, which allows for a simple solution patterning process across large format displays.

A typical CNT-AgNW film is fabricated by depositing a sheet of AgNWs on a transparent substrate. Single walled
CNTs are then deposited from an ink/polymer binder suspension on the AgNW film in the desired electrode matrix pattern. After drying the CNT pattern at low temperature (~100 °C in air), the film is ready for etching. The CNTs act as an etching mask, allowing the exposed AgNW film to be removed with ferric nitrate, which is the standard etchant used for patterning silver films. In total, the fabrication process only involves two steps and involves standard materials available in bulk quantities.

The CNT-AgNW film best suited for large-format touch screens has a sheet resistance of 30 OPS, ~88% VLT, and
~1.5% haze. These properties make this type of film ideal for large-format touch screens, including flexible touch screens. The SEM image below shows an example of such a hybrid material with single-walled CNTs printed on AgNWs. Although the deposited AgNW network is disordered, the fill factor is kept low, which keeps haze low below 2% when patterned on 7-mil PC or 5-mil PET. 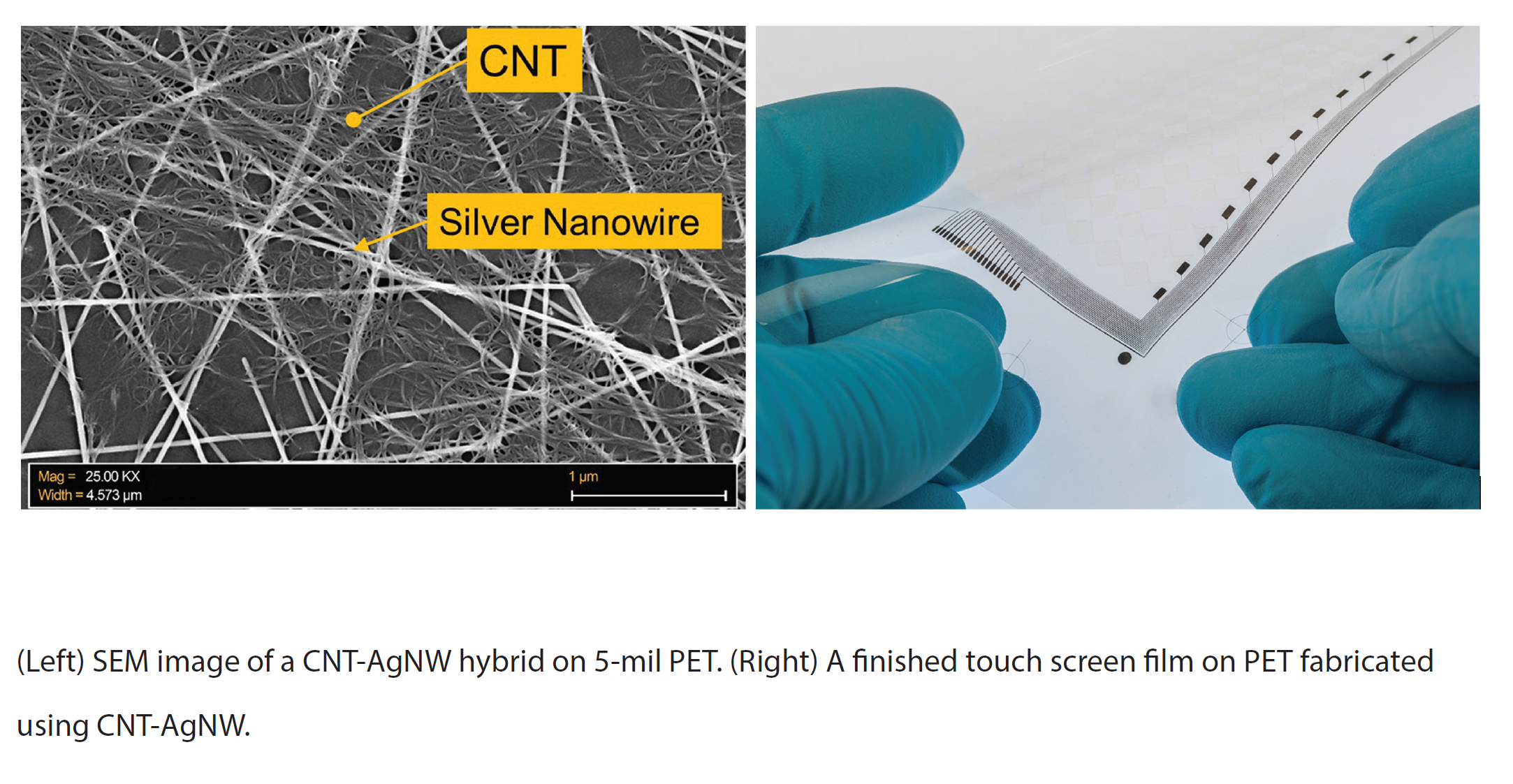 The SEM images above show how AgNWs in this hybrid material are encapsulated by a CNT layer, providing a continuous film that can be easily screen printed. The encapsulated AgNWs act as a conductive support for the continuous CNT layer, providing consistent sheet resistance at the macroscale. The combination of these two materials in the hybrid film provides sheet resistance that is comparable to a dense AgNW film or transparent conductive oxide, yet the film has low haze thanks to the low concentration of AgNWs mixed with CNTs. Contrast this with dense AgNW films, which must be deposited vertically to ensure low sheet resistance, low haze, and high VLT.

On its own, an AgNW film on a flexible substrate is susceptible to fracture when flexed. Because the CNTs encapsulate the AgNWs, the mix of these materials creates a continuous hybrid film that can flex and bend easily. Tension and compression are relieved in the CNTs, which have higher mechanical strength and elasticity than AgNWs. When deposited on a flexible transparent substrate, this material can be easily brought into a flexible touch screen stackup of any size.

Encapsulation of AgNWs with CNTs provides another benefit when one considers the environmental stability of AgNW films used for electrode grids in touch screens. Ag will tarnish due to a chemical reaction between silver and sulfurous substances in air, and the tarnishing reaction rate is higher in the presence of humidity or at higher temperature. The CNT layer protects the AgNW layer from tarnishing during operation, providing very stable sheet resistance at high temperature for long periods. This is shown on the hot/wet test data on the next page. In a humid high temperature environment, the sheet resistance can increase, but the final sheet resistance is not so large that the grid becomes unusable. 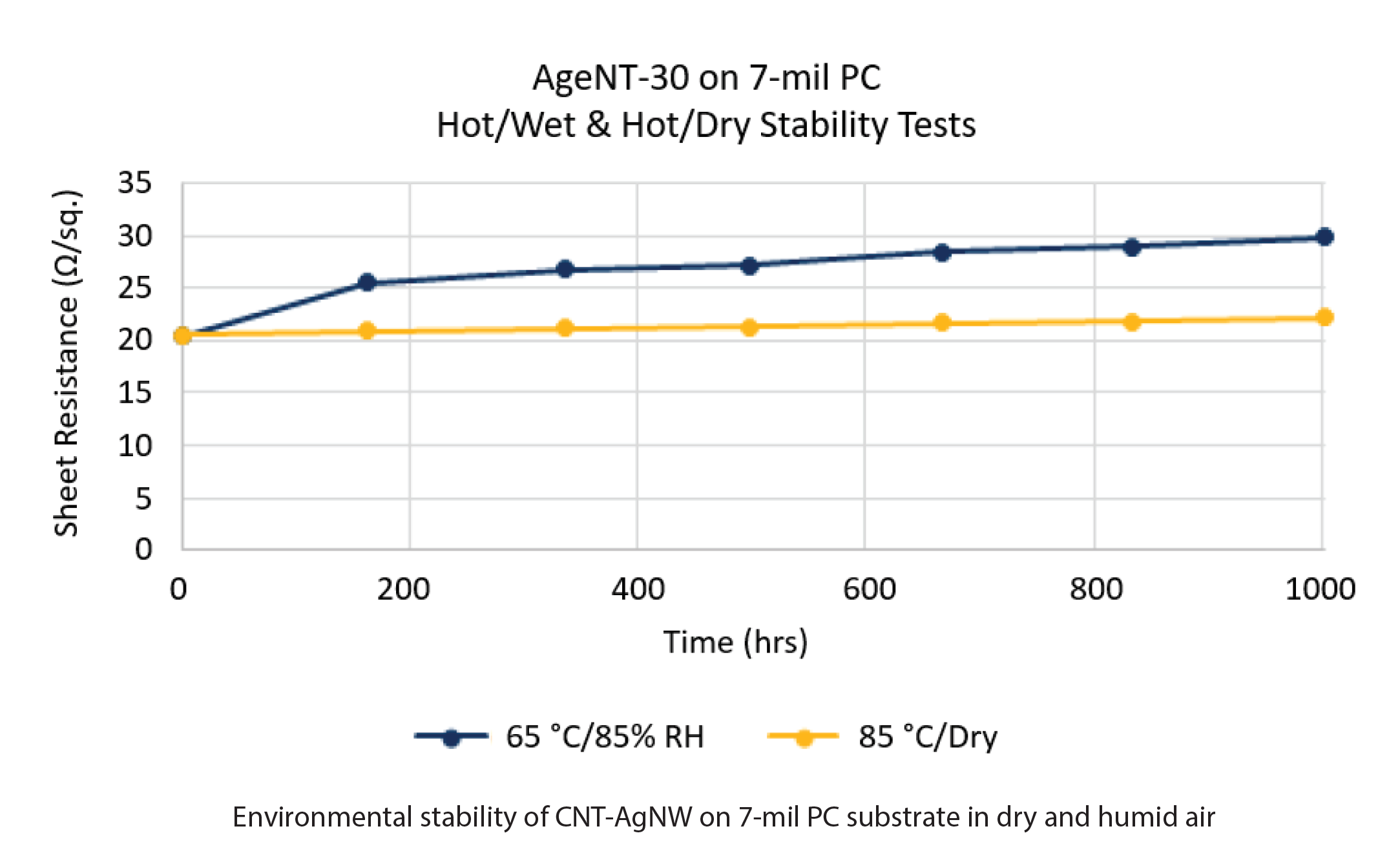 Although the per-unit-weight cost of this hybrid material is higher than that for ITO, the extremely simplified fabrication procedure for this type of hybrid film reduces the total cost of the finished electrode grid. This makes CNT-AgNW hybrids extremely price competitive; touch screen stackup designers don’t need to worry
about fabrication costs for ITO or metal meshes. Electronics manufacturers can also see lower total costs as the deposition process requires fewer fabrication steps (printing and etching only) with less waste compared to photolithographic etching. Productivity can also be kept high as the throughput with screen printing from
a suspension is much higher than with laser ablation. Screen printing across large substrates is extremely reliable compared to sputtering, yielding an electrode grid with consistent sheet resistance across the entire substrate.