What is RF Energy and SAR?

RF energy – or radiation – is just another name way of referring to radio waves. According to the FDA, RF radiation “is one form of electromagnetic energy which consists of waves of electric and magnetic energy moving together (radiating) through space.” All energy waves are classified based amplitude – the height of the wave – and frequency – the distance between the waves or their wavelength. As shown in the figure below, radiation is also classified as “ionizing” or “non-ionizing” based on the impact it has when interacting with other matter.

Get Your Free Copy: How Manufacturers Can Reduce RF Exposure in Mobile Devices 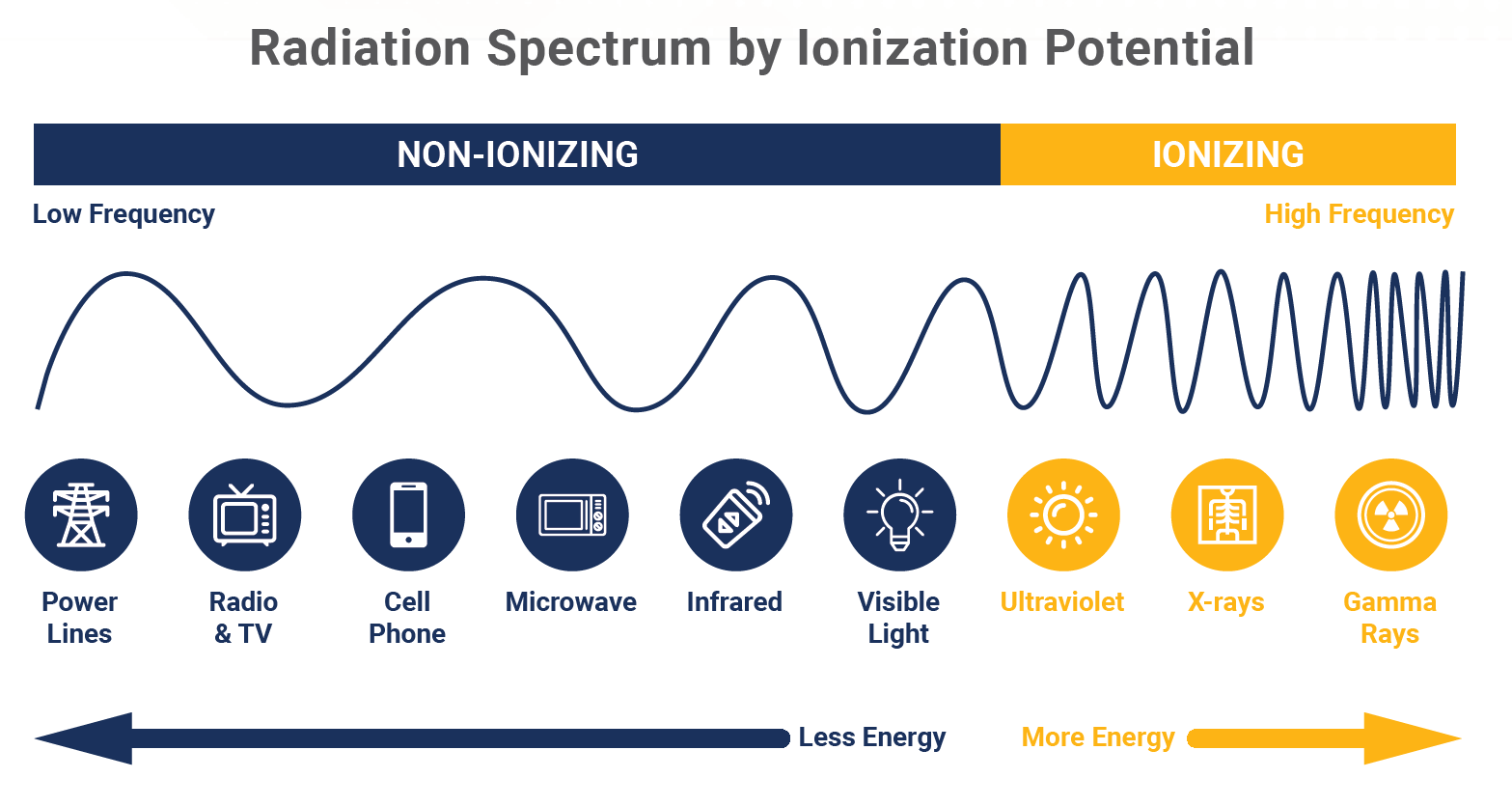 Higher frequency radiation such as X-rays and Gamma rays have the capability to remove an electron from an atom, breaking them down into smaller parts to create ions. This “ionization” can potentially break down the molecules comprising the impacted atoms causing damage and interfering with their proper function. This is why your dentist will drape a lead cover over you when x-raying your teeth. Ionizing radiation can also break down human DNA strands leading to cancer.

Lower frequency radiation is “non-ionizing”, so when interacting with organic material – such as humans – the atomic or molecular structures are not altered and the result is simply heat. We use microwaves to heat our food and infrared heaters to warm our homes. However, long term exposure can still be detrimental. You would not want to stand next to a microwave oven in use without any EMI shielding enclosing the device. When it comes to assessing the hazardous impact on humans, the overall dosage of radiation is not the sole contributor but also the accumulation of radiation over time.

Cell phone radiation level varies from device to device and is measured by the SAR. As stated previously, the specific absorption rate or SAR is a measure for the energy absorbed by the body when exposed to a radio frequency (RF) electromagnetic field. A mobile device’s SAR rating is used to estimate the maximum rate of RF energy absorption by a user’s head and body when using the device.

According to the FCC, SAR testing uses standardized models (a test dummy) of the human head and body that are filled with liquids that simulate the RF absorption characteristics of different human tissues.

The SAR test dummy is based upon a large adult male (6’2” tall and 220 pounds) called the Specific Anthropomorphic Mannequin, or SAM. 97% of the population is smaller than the SAM model, meaning that only 3% of cell phone users are represented. In order to determine compliance, each cell phone is tested while operating at its highest power level in all the frequency bands in which it operates, and in various specific positions against the dummy head and body, to simulate the way different users’ typically hold a cell phone, including to each side of the head.

Click Here to Get Your Free Copy: How Manufacturers Can Reduce RF Exposure in Mobile Devices

To test cell phones for SAR compliance, the phone is precisely placed in various common positions next to the head and body, and a robotic probe takes a series of measurements of the electric field at specific pinpoint locations in a very precise, grid-like pattern within the dummy head and torso. All data for each phone placement is submitted as a part of the equipment approval test report for final authorization. In the U.S., the FCC requires that cell phone manufacturers conduct their SAR testing to include the most severe, worst-case (and highest power) operating conditions for all the frequency bands used in the USA for that cell phone. The SAR values recorded on the FCC’s authorization and in the cell phone manual to demonstrate compliance with Commission rules indicate only the highest single measurement taken for each frequency range that the particular model uses. FCC approval means that the device will never exceed the maximum levels of consumer RF exposure permitted by federal guidelines, but it does not indicate the amount of RF exposure consumers experience during normal use of the device.

A recent study by Bundesamt für Strahlenschutz in Germany shows the amount of RF energy emitted while a cell phone is held close to the ear, by brand and model. While the FCC in the US sets the standard for phones at 1.6 W/kg. In contrast, the Blue Angel standard in Germany requires that phones have a SAR of no more than 0.60 W/kg.

Looking for a material that can redirect RF without interfering with cell phone design? Check out our RF shielding materials.