Which EMI/RFI Shielding Material is Best for Your Application?

The current range of candidate materials for use as RFI shielding include conductive metal oxides, metal meshes, nanowires, and carbon-based materials. Some solutions are more easily incorporated into the manufacturing process, while other solutions are best applied as an add-on material.

Today, the simplest touchscreen electrode matrices are built from transparent conducting films (TCFs) made from conductive doped metal oxides like FTO, AZO, or ITO. These materials provide anywhere from 1 to 100 OPS sheet resistance, depending on the film thickness and dopant content. An alternative TCF with similar somewhat lower sheet resistance values is porous metal mesh films. These materials are used as touchscreen electrodes, as well as a shielding material for windows and displays. Substrates for these devices include glass or a flexible polymer (polycarbonate, PET, or PMMA), requiring the metal film to be carefully incorporated into the manufacturing process or added to the exterior of the screen or window during assembly.

TCFs made from conducting oxides have been successfully used as electrodes for touch screens and a variety of novel optoelectronic devices, and they dominated the touch screen market as an electrode material until recently. As a conductive material, TCFs can provide some natural shielding along the surface of the screen, but this is clearly insufficient given the known EMC challenges. While a TCF add-on film could be placed to provide some shielding, engineering a metal oxide TCF with low sheet resistance and cost without sacrificing transparency remains a challenge. While thicker metal oxide TCFs have higher conductivity and lower sheet resistance, they have lower VLT, which defeats their purpose as a highly transparent conductor in the visible range.

The advent of foldable consumer electronics has encouraged production of flexible display materials and shielding materials that can be added to existing displays or incorporated into displays during manufacturing. New touch displays are being made from active-matrix organic LEDs (AMOLEDs) that can be folded and flexed; these materials are currently used in foldable smartphones, but they could also make their way into flexible wearables. The SE of these materials used as electrode matrices is lower than that of oxide TCFs, so some additional shielding material is still needed. Because conductive metal oxides like ITO are brittle materials, they should not be used on a polymer substrate as an add-on shielding material.

The drawbacks of metal oxide TCFs as shielding materials has motivated development of metal porous mesh materials, which have lower sheet resistance than oxide TCFs. These materials are advantageous as they can be deposited on flexible transparent substrates and used in foldable electronics. This type of flexible RFI shielding material is commercially available as an add-on that can be applied directly to windows or displays by cutting it from a roll of material and applying it to a display with an adhesive or by stretching across the display/window. However, commercially available material can only provide a sufficiently high SE value if the film is made sufficiently dense, which brings the VLT value below 70%.

Other unique thin-film metallic materials have also been reported in the literature or are available commercially. These include Ag nanowire (AgNW) materials, which provide among the lowest sheet resistance values for thick films (<1 OPS), but they tend to have less than 90% VLT, are expensive, and can tarnish if not hermetically sealed. While foldable hybrid metal/metal-oxide TCFs have been reported in the literature, these films only provide maximum VLT up to 80% and SE reaching ~30 dB, which do not meet the operational requirements of transparent RFI shielding materials.

The table below summarizes the characteristics of various transparent RFI shielding materials used in windows and displays. Typical SE values are shown at ~1 GHz.

Typical shielding and VLT requirements in transparent flexible electronics require at least 40 dB SE and ~90% VLT, and it is difficult for the current class of commercially available materials to meet all requirements. A best-in-class alternative shielding material should provide near this level of broadband SE (from ~100 kHz up to at least ~10 GHz) to suppress RFI from multiple sources while also ensuring high VLT. Because of the drawbacks of conventional TCFs, carbon-based materials – in particular nanotube hybrids – are emerging as an increasing viable solution.

More recently, researchers have looked to alternative advanced materials such as nanotubes and graphene as a material platform for transparent thin-film shielding with high SE for suppressing broadband RF emissions. As aggregated, solution-processable materials, both can be deposited on a flexible substrate and folded or formed without fracturing, and the material properties can be modulated based on the nanotube morphology or graphene flake size. Between these two carbon materials, nanotubes represent a more promising platform as they are less expensive to produce at scale, and select suppliers can use sophisticated methods to modulate the size and structure of these materials during synthesis. An example SE measurement for a Nanotube-MM film on PET is shown below. As can be seen in the figure, the peak attenuation exceeds 90 dB and remains above 40 dB across the entire measured from 100 kHz to 10 GHz. This addresses a range of possible EMI sources, spanning from clocks to switching regulator noise, cellular frequencies from 1G to 5G including millimeter wave, and RFI generated from power bus ripple, all of which are common sources of RF emissions in systems with touchscreens. 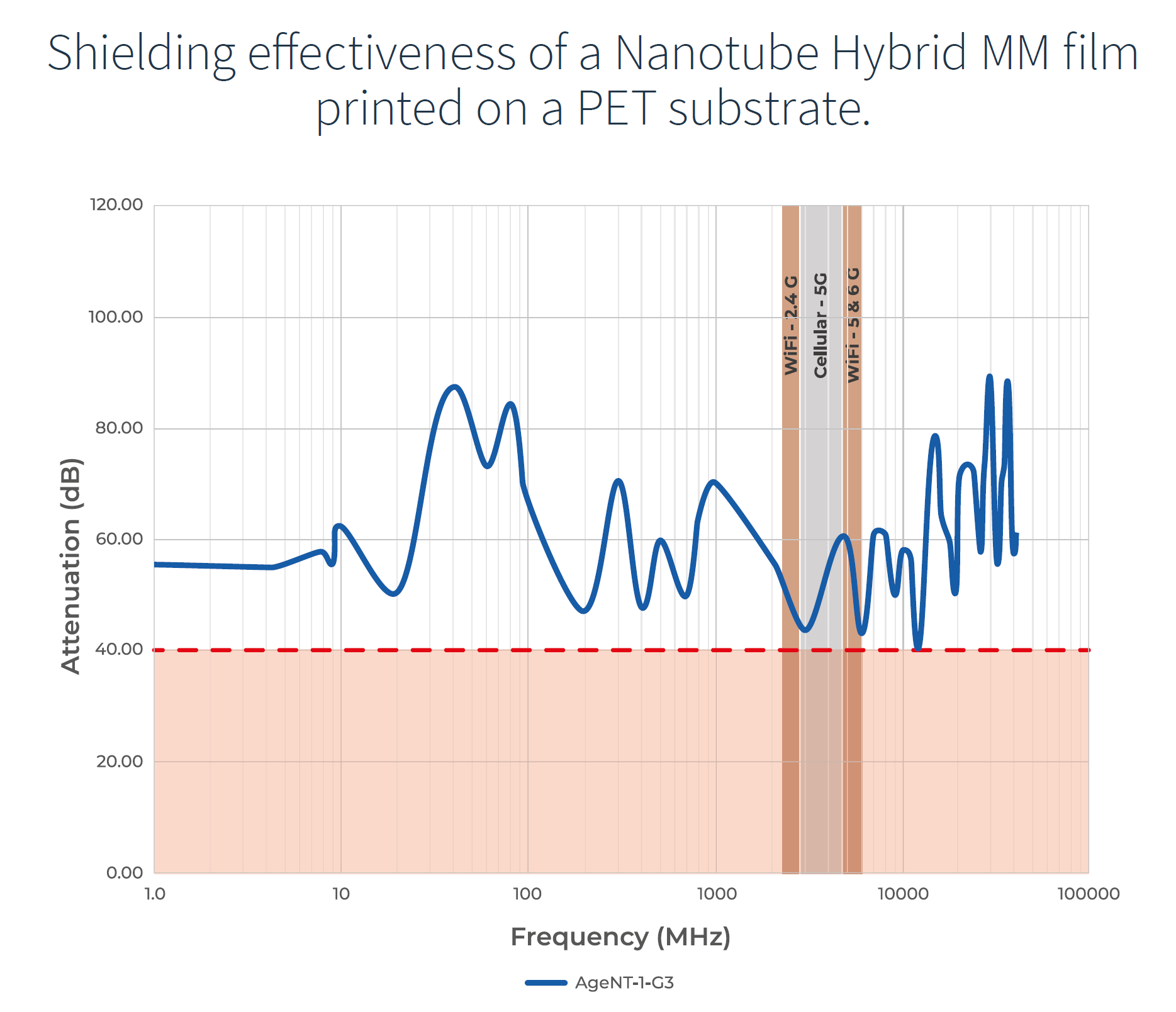 Requirements for cellular and WIFI connectivity of contemporary devices in consumer electronics and industrial applications are commonplace. Engineers and designers looking
to safeguard across the expected operational frequencies ranges generally set an objective of achieving 40dB of shielding effectiveness in the range of 100kHz to 40GHz. As shown in the
figure above, the MM nanotube hybrid of AgeNT-1-G3, consistently delivers shielding effectiveness equal or well above the 40dB desired value across the entirety of the tested frequencies. Including this thin, transparent shield universally provides shielding protection
– particularly across the predominant WiFi and cellular frequencies including 2G and 5G.

Looking to learn more about how CHASM's Nanotube Hybrids? Get a free materials evaluation: